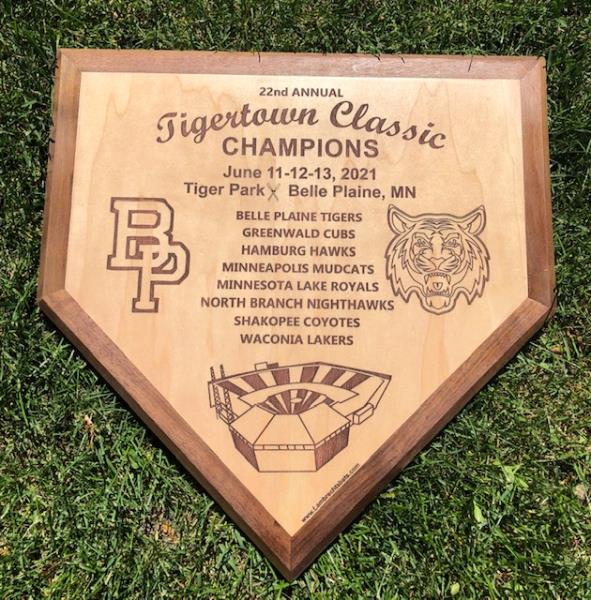 After two more losses last weekend, the Tiger Wagon is limping along with a 1-8 record (0-5 River Valley League). Perhaps the ghosts of Tiger Past, some of whom will be appearing at Tiger Park this weekend and particularly on Friday night, can resurrect some of the club’s former glory.

The Tigers were overpowered at home by an always-excellent Jordan club on Friday, before watching a big lead turn into disaster at Le Sueur on Sunday.

The 22nd (mostly) annual Tigertown Classic tournament is this weekend, with the host Tigers getting things started against former fan favorite Brad Lawson and the Minnesota Lake Royals at 6:30 pm. Friday is also Tiger Alumni Night, as all former players will receive free admission and a refreshment (or two) for their troubles.

Waconia and the Shakopee Coyotes will entertain the fans at 8:30 pm in the evening’s second game. Saturday offers a five-game slate at Tiger Park, starting at 10:30 am when the Minneapolis Melchiors (Mudcats) take on a first-time entrant, the North Branch Nighthawks. Hamburg and Greenwald will resolve their differences at 12:45 pm, with games also to follow at approximately 3 pm, 5:15 pm and 7:30 pm.

If Los Tigros win Friday, they’ll play at 7:30 pm Saturday; with a loss, at 5:15 pm. Stay tuned to bptigertown.com and twitter.com/bptigertown for all the latest. The tournament will conclude on Sunday with games at 11 am, 1:15 pm and the championship at 3:30 pm.

In seeking their 20th straight triumph over the Tigers, Jordan rolled out crusty veteran Scott Hollingsworth – who simply looked as good as if the clock were turned back 10 years. The former minor-league right-hander tossed six frames of three-hit ball, allowing one run while ringing up eight strikeouts.

The Brew Crew jumped on Tiger starter Jake Mercado for two runs in the first inning, but the fellow right-hander – fresh off a memorable run with his collegiate St. Mary’s team – settled down quickly and kept the score in place until allowing single tallies in the fifth and sixth. Although hung with the loss, Mercado nonetheless proved worthy of working towards the top of the Tiger rotation as the season unfolds.

Alex Beckman relieved Hollingsworth and didn’t allow a run or hit in grabbing the three-inning save. Colton Kerkow (2 IP, 2 R) and Jon Schmidt (1 IP, 0 R) served as the clean-up crew for Belle Plaine.

The Tiger book credited four hits, with those belonging to Mercado, Schmidt, Josh Terrio and Carsen Ladd – the latter of whom also ripped a couple of line-outs.

While details remain sketchy and may forevermore be so regarding Sunday’s licking in Le Sueur, what we do know is already enough to leave a mental scar.

Team Tigertown scored four times before the Braves batted, then added three more tallies in the fourth for a 7-0 lead. The Braves finally shot back in the fifth, scoring four times for a 7-4 BP advantage.

A three-run tater from Mitch Casperson tied the game, 7-7, and the not-so-friendly host went whammy one more time before all was said and done. Le Sueur’s Burke Nesbit was another beast with the bat, totaling 10 bases while contributing four scoreless on the hill.