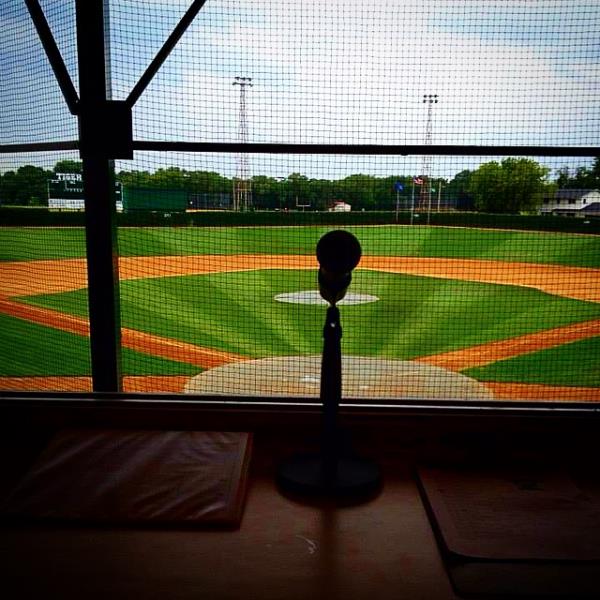 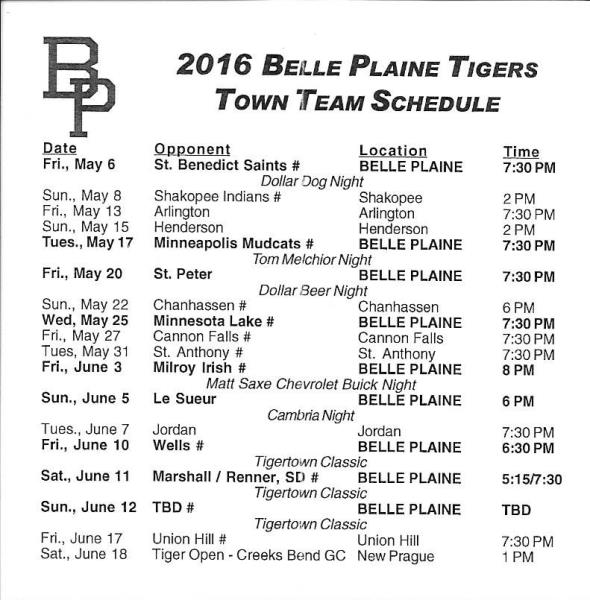 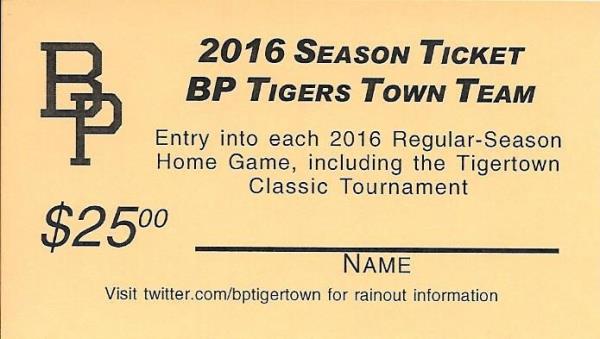 Another season of Belle Plaine Tigers Town Team Baseball is about to descend upon Tigertown. The first of 14 regular-season home games (31 overall) will take place on Friday, May 6 when the St. Benedict Saints visit Tiger Park at 7:30 pm.

Not that anyone would confuse us with the St. Paul Saints but except for the Tigertown Classic tournament, all but one home game will feature a promotion. See the full list on the enclosed season schedule, and we wanted to highlight one promotion in particular.

Tom Melchior is a former Tiger who has written books titled "Scott County Baseball" and “Belle Plaine Baseball 1884 to 1960.” We will observe Tom Melchior Night on May 17 to thank Tom for his tireless work in chronicling the history of Tiger Baseball. That night’s opponent is the Minneapolis Mudcats, who will be playing the inaugural game in the new franchise’s history. Managing the Mudcats will be Tom’s son, Paul, and playing will be Tom’s eldest grandson, Sam.

We are thankful for you, the people that help make Tiger town team baseball go and make it all-the-more worthwhile for the players to take the field. And we hope that the value returns to you in that you enjoy whatever visits you’re able to make to Tiger Park each summer.

Season tickets are a great way to support the Tigers, and the price will once again remain unchanged. Just $25 will get you a season pass while a $50 Dugout Club membership also gets you a free food and beverage item at each game. Pick up your tickets at the gate on game days, at Brad’s Barber Shop, or from any Belle Plaine Baseball Association board member.

The two primary fundraisers are back by popular demand: the 18th annual Tigertown Classic, an eight-team invitational tournament held June 10-11-12. While the Classic is primarily supported by the teams that play, like Uncle Sam we want YOU for this year’s Tiger Open golf tournament fundraiser!

This year’s Tiger Open – for the second year in a row – will be held at CreeksBend Golf Course in New Prague on Saturday, June 18. The price is nice at just $60 per golfer and includes a meal at day’s end with numerous prize giveaways. A registration form is enclosed, but you may also register by simply emailing former Ace of the Staff pitcher Shane Hofmann at bphof21@yahoo.com.

In all this bluster don’t think we’ve forgotten about the ballclub – the re-made Tigers climbed out of a 2-11 hole to start the season, playing .500 ball (9-9) the rest of the way. Team Tigertown stunned the RVL West’s No. 1-seeded St. Peter Saints to clinch a state tournament berth, then surprised even the Tiger moms by winning a game at state, against Hadley. Manager Mike Schultz and his brothers, elder statesmen Pat and Matt, will look to help the Tigers cash in on the promise shown late last year.

We didn’t invent social media but we do try to stay on top of it, as never has it been easier to stay connected to your local nine than it is today. Follow the Tigers on Twitter @bptigertown for around-the-clock coverage and like us on Facebook as well – just search bptigertown.

Game nights at Tiger Park are a tranquil time, and especially if we haven’t seen you in a while we encourage you to rediscover what was once, and will always be, yours. From the food to the action, from park improvements to familiar faces, we’ll see you at the ballpark this summer.